Last week, markets were jarred by comments from Lael Brainard, one of the Federal Reserve’s most dovish members, who said the Fed needed to move more aggressively in unwinding its balance sheet to combat inflation. The release of the Fed’s minutes from its March meetings also rattled markets, as the minutes showed the Fed appeared poised to raise rates higher and faster and unwind its balance sheet sooner. That was a signal that efforts to tame inflation were serious and warranted.

As you may have guessed, markets immediately went into a tizzy with concerns the Fed would go too far or too fast. Projections were thrown out as to where rates will be by year-end and if the Fed would drive the economy into a recession. Interestingly, talk of recession is ubiquitous now; when we started the year, a recession wasn’t even a remote possibility for many market commentators. The same commentators also told us to expect a rate increase after June and to expect two or three rate increases in 2022, only after the Fed stopped buying bonds as it tapered and removed quantitative easing.

Those projections appear wrong and overly optimistic, causing markets to expect a slow, gradual transition with a soft landing. The Russia-Ukraine conflict threw a wrench into these plans, which didn’t appear to consider all possible outcomes, like raging inflation, exorbitant gas prices and cratering consumer confidence. All this did not go unnoticed — and the yield curve has inverted several times as a result. As it’s jokingly been said before, the last 12 inversions have predicted the last six recessions. Not to be too flip, but not every yield curve inversion has heralded a recession. However, we have always had an inversion before a recession in modern times.

Finally, the last bastion of strength has begun to show signs of wavering. Thirty-year mortgage rates have crested over 5% for the first time since 2011. Low mortgage rates have helped drive this red-hot real estate market, and housing prices have soared. However, if the 30-year rate hits 5.75%, that would be the threshold where affordability becomes out of reach for most homeowners and the housing market could stall and decline. Also, the housing market drives not only construction jobs, but also all the other items that come with owning a home, from appliances to furniture. A possible slowdown in the housing market needs to be seriously monitored.

Big oil executives were on display last week, as Congress “demanded” and Big Oil’s role in setting them. There was no mention of the current administration’s policies that have had a material impact on supplies in the U.S. Oil drilling, production and distribution slowed during the worst of the pandemic, and just as demand began to pick up, the energy industry was throttled with more regulations and obstacles. Yet Congress is happy to complain about non-existent price-fixing in a global industry that was content to produce oil at $40-$60 per barrel and not produce more at $100 per barrel?

In Kansas, drivers are paying $3.72 per gallon on average, while in California, the average price per gallon is $5.80. The gas spot price, as determined by the commodity markets, is the same everywhere, so what’s the difference? Well, prices in California are higher thanks to higher taxes, special blends meant to limit greenhouse gases and the need to ship or truck in additional fuel because there isn’t enough gas being produced in the state. Not to mention that the cost of living is higher in California, leading to a bigger discrepancy in what Americans are paying. Big oil owns less than 1% of the gas stations in the United States, so yelling at the CEO of Exxon may look good on TV but does little to address the real issues that have put us where we are.

There has never been any proof that U.S. oil producers collude to fix prices. The sad truth is we have limited production by our own hand, and we have made ourselves vulnerable to external players who can manipulate the amount they produce and, therefore, the price. Now look at OPEC, a self-described “cartel,” which is defined as “an association of manufacturers or suppliers with the purpose of maintaining prices at a high level and restricting competition.” That’s who we would rather deal with and expect a good outcome?

We are not ready for a fossil-fuel-free economy yet, and as soon as we wake up to the fact that fossil fuels will likely be with us for a long time, the sooner we can start working toward a cleaner, greener solution to our energy needs rather than this current situation. It would be nice if our politicians would spend more time on realistic solutions rather than showmanship. This week’s hearings were not helpful to the economy or the problems consumers face. 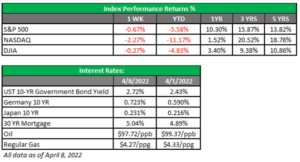