The markets take a wild ride!

The market continued its volatile ride last week, with massive swings before and after the Federal Reserve’s announcement. (More on that below.) We had major gyrations as various factors weighed on a market that’s desperately seeking consensus. After wiping out a 1,000-point drop on Monday, the wildness continued with another 1,000-point swing on Tuesday and a 900-point swing on Wednesday. On Thursday, we got a surprise fourth-quarter gross domestic product (GDP) number of +6.9%. Markets initially rose on the news but Who would have thought we’d end in the red on a day when we saw +6.9% GDP growth?

The high GDP increase was somewhat of a surprise. October must have been incredible in the gap between the Delta variant surge subsiding and Omicron taking hold, while November and December were pretty slow. Even with the growth, there is a lot to be pessimistic about concerning the economy. Tensions in Ukraine, oil creeping closer to $90 per barrel, the 10-year U.S. Treasury closing in on 1.9% last week, the Fed talking interest rate increases and tapering, and the consumer wilting in the face of higher prices all make it difficult to get excited about markets.

Finally, Apple reported record earnings after the close on Thursday, which pushed markets upward to end the week. After finishing 2021 on a high note, markets have drifted downward toward correction territory. (In fact, the Nasdaq is already there.) There has been ample opportunity for investors to position themselves for the turbulence we are experiencing, and there still may be time as we experience false rallies amid mostly gloomy news.

Let’s put things in perspective: As grim as things may seem, think about how much worse we could be right now if we acted on our fears. Benjamin Graham once said, “In the short run, the stock market is a voting machine. Yet in the long run, it is a weighing machine.” Right now, the vote appears to be bearish, but it will likely not last. Volatility is here for 2022, and returns will be challenged in the first half of the year. However, once we get clarity from the Fed and markets level off, we’ll likely have a strong second half, and many of these worries will likely subside.

Fed lays out its tightening plan

There was consensus going into last week that we would see the end of quantitative easing and that we could expect four rate hikes in 2022, starting in March. The Fed meeting left us with the details that bond purchases were lowered to $30 billion per month and a likely rate hike would take place in March, although the Fed made no real commitment on that front. Fed Chair Jerome Powell also confided that inflation should have been worse and that the supply chain won’t get fixed for a year. All of this combined killed a pretty decent rally last Wednesday.

Here’s our question: If inflation is worse than what you thought, shouldn’t you stop putting more money into the economy? Why not end the bond purchases altogether and send a strong signal in March that you will definitely raise rates in a “meaningful manner” — and that you will do so at each Fed meeting until we see inflation return to more normal levels? Let the market figure out what you mean by meaningful, whether that’s 25 or 50 bps per meeting or four or five increases per year. If things are moving in the right direction, then Powell can pull back on the tightening and the markets will rally on the surprise news. This “we are prepared to raise rates in March depending on the data” appears to be a weak dovish stand meant not to upset the markets. Unfortunately, it did because the markets are smart enough to know that the Fed will need to act or it may lose control of the inflation fight (if it hasn’t already done so). Give us all of the bad news at once so we can process it and move on from this death by a thousand cuts. Parlor games and furtive glances — that’s a tough way to invest.

On the supply chain statements Powell made, it’s difficult to project when that mess gets cleaned up. Many things impact the supply chain: worker availability, regulations, government interference and consumer behavior among them. However, these are all things the Fed cannot control. The Fed needs to realize that the high levels of inflation we are experiencing exist because of excessive liquidity they’ve created through accommodation, along with the federal government’s deficit spending. Inflation was not caused by “Big Meat,” “Big Gas,” “Big Auto,” “Big Grocery” or “Big Toilet Paper.” It was caused by putting all this money into the hands of people, and more was demanded than our ability to produce it, so logically pulling money out of the system will result in less being consumed and supply will not be strained. 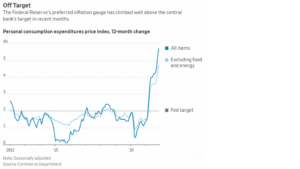 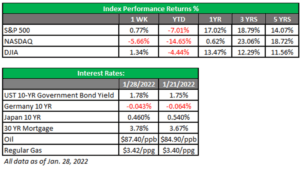