Inflation numbers keep setting the wrong kinds of records. Last week’s inflation data showed consumer prices rose 7.0% over the past year, the largest 12-month gain since June 1982. Core inflation — which doesn’t include food and energy — rose 5.5%, the most since 1991, while core producer prices were up 9.7% year over year, hitting the highest level in records going back a decade. Add in a 1.9% drop in December retail sales, and it made for a rocky week in the markets. 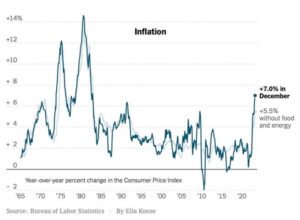 Last week, Federal Reserve Chairman Jerome Powell told lawmakers that the Fed would take strong action to curb inflation, and some analysts have said they now expect four interest rate hikes in 2022, not three. Employment numbers are only adding to the inflationary pressure; the unemployment rate fell to 3.9% in December. Low unemployment now could signal we’re headed toward a wage-price spiral later, where higher prices cause workers to demand higher wages, which leads to higher prices, which leads to … well, you see where this is going.

Talk about interest rate hikes wasn’t the only thing causing market jitters last week. Minutes from the Fed’s December meeting revealed comments about winding down their $9 trillion balance sheet. We also kicked off the unofficial start to earnings season, with JPMorgan Chase and Citigroup reporting lower profits in the fourth quarter. Hopefully, this isn’t a foreshadowing of other earnings reports to come.

Remember two years ago, when “flatten the curve” was all the rage? Seems we’ve flattened the curve of a different kind. Short-term rates continued their ascent ahead of tighter monetary policy, leading to a flatter yield curve last week.

One bright spot among all the doom and gloom was retail inventories, which rose 1.3% in November. It doesn’t sound like a lot, but it was the highest increase since February 2021. Is it a sign that supply challenges are beginning to ease up? Retailers and manufacturers alike would love to be able to answer that question with a resounding “Yes.”