Cleaning up the damage from Afghanistan and Hurricane Ida

Are we headed back to normal? It’s a nice thought – but it may be some time before we get back to “normal” following both Afghanistan and Hurricane Ida. We departed Afghanistan after 20 years, and most Americans were supportive of getting out. But following the withdrawal, President Joe Biden has suffered in the polls and the market’s concern is that spending bills will be sidetracked or derailed. Markets have priced in much of the anticipated spending and expect the infrastructure and $3.5 trillion budget bill to become law. West Virginia Senator Joe Manchin suggested he would not support the budget bill right now, citing the need to avoid artificial deadlines. The events in Afghanistan may reveal many lessons and insights into our political leaders over the next several months. Markets likely won’t like any delays because the potential for the deal to fall apart in a 50-50 Senate is very real.
Hurricane Ida tore through Louisiana on its way to flooding the Northeast. Power was out in New Orleans, and New York City suffered major flooding. The response to the storm’s aftermath will be important, and if it’s mismanaged, it could lead to delays in the approval of the spending bills. One might think the infrastructure bill is a natural response to help with the devastation.

Jobs data points to what we’ve been saying: Things are slowing down

The ADP number was below consensus for the second month in a row last Wednesday. Expectations were for an increase of 500,000, while the actual number was 374,000. The Friday BLS report was even worse; consensus was calling for an increase of 740,000 new jobs, with the low end of the estimate range coming in at 377,000. The actual number? A mind-numbing low of 235,000 new jobs.
The report was abysmal, whether from delta variant fears, continued enhanced unemployment benefits, rent payment moratoriums or a combination of all three. This jobs report is one touchpoint validating what we’ve been saying: that the economy will likely slow in the second half of the year. Yes, we had a similar situation earlier this year, when a disappointing April report was followed quickly by two very strong months (June and July). We still have over 10 million jobs that need to be filled, but there’s no sugarcoating Friday’s numbers.
Unemployment dipped to 5.2%, which is encouraging. The long-term rolls of unemployed Americans dropped by 246,000 while the labor participation rate stayed steady at 61.7%. Retail saw the biggest drop (down 29,000), which could be related to delta as people avoided going out to shop. Or inflation could be to blame because things cost more and people were less likely to venture out to spend. Either way, fewer workers were needed. Retail was also hit hard by the recent drop in consumer confidence.
Wall Street was typically short-sighted in light of these numbers, pivoting to the belief that, with a jobs number so bad, the Federal Reserve would hold off tightening as many expect at the end of this year. There are, however, much more dire longer-term consequences for the markets if consumers spend less and are less confident. No amount of Fed stimulus can outweigh bad earnings from companies and a lack of spending from consumers. Remember, U.S. consumers drive 70% of the economy.

September is here — but where’s the volatility?

September started where August left off: no volatility, bad news being ignored and a year-to-date level on the S&P 500 we haven’t seen since 1998. What’s it going to take to experience one of the downs in the never-ending story of market ups and downs? It sure wasn’t the comments made by Fed Chair Jerome Powell at their meeting in Jackson Hole last week. Powell threaded the needle between saying something and not saying anything at all. After some marvelous “econo-Fed-speak,” he basically said we are continuing to provide massive liquidity and will decide in the coming months if we need to change that.
Here’s how the market hears these statements: “BLAH, BLAH, BLAH … accommodation will continue … BLAH, BLAH, BLAH … we’ll decide in the coming months … BLAH, BLAH, BLAH.” That’s all the reason the market needs to keep climbing. If there is no meaningful competition in the form of higher interest rates, money will flow to the stock market. And if the government continues to print money while rates are low, money will go to the stock market.
How long will rates stay low? At least into next year because 1) Powell is interviewing to keep his job and 2) the current debt level and government spending cannot handle higher rates. See how that works? 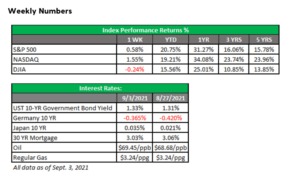 AE Wealth Management, LLC (“AEWM”) is an SEC Registered Investment Adviser (RIA) located in Topeka, Kansas. Registration does not denote any level of skill or qualification. The advisory firm providing you this report is an independent financial services firm and is not an affiliate company of AE Wealth Management, LLC. AEWM works with a variety of independent advisors. Some of the advisors are Investment Adviser Representatives (IAR) who provide investment advisory services through AEWM. Some of the advisors are Registered Investment Advisers providing investment advisory services that incorporate some of the products available through AEWM. Information regarding the RIA offering the investment advisory services can be found on https://brokercheck.finra.org/. Investing involves risk, including the potential loss of principal. No investment strategy can guarantee a profit or protect against loss in periods of declining values. The personal opinions expressed by Tom are his alone and may not be those of AE Wealth Management or the firm providing this report to you. The information and opinions contained herein, provided by third parties, have been obtained from sources believed to be reliable, but accuracy and completeness cannot be guaranteed by AE Wealth Management. This information is not intended to be used as the sole basis for financial decisions, nor should it be construed as advice designed to meet the particular needs of an individual’s situation. None of the information contained herein shall constitute an offer to sell or solicit any offer to buy a security or insurance product. 1827503-1