Is the September curse rearing its ugly head? Each of the major domestic equity indexes dropped last week, experiencing losses every day. (Well, every day except Monday, when markets were closed for Labor Day.) Many factors conspired to push markets down, from continued inflation concerns and increases in longer-term interest rates to political uncertainty.
The previous Friday’s significant August payrolls miss seemed to dampen optimism as we opened the shortened week. Then on Wednesday, Axios reported that Democratic Sen. Joe Manchin backs as little as $1 trillion of President Joe Biden’s proposed $3.5 trillion spending plan, although some sources indicated later that Manchin might be willing to go as high as $2 trillion. Why are people watching Manchin so closely on this topic? Because with an evenly divided U.S. Senate, passage of the bill could be held up by even one dissenting vote.
Inflation worries are also weighing heavily on investors’ minds. Stocks slipped late in the week after the Labor Department reported that producer prices rose 0.7% in August, slowing from July’s 1.0% gain. (It still beat the forecast of a 0.6% increase.) The Job Openings and Labor Turnover Survey (JOLTS) data released mid-week also indicated challenges ahead for our economy, with a record 10.93 million positions waiting to be filled in July. That’s almost 1 million more than consensus estimates. One piece of good news: Weekly jobless claims fell more than forecast to a new pandemic-era low of 310,000. The new low coincides with the end of extended unemployment benefits, which expired Monday, Sept. 6.
Companies had even more to worry about following President Biden’s announcement Thursday of new vaccination mandates for large employers and federal workers. The mandate calls for all workers at companies with 100+ employees to either get vaccinated or submit to weekly testing, while vaccination is mandatory for federal workers and contractors. The announcement got strong mixed reactions, to say the least. Some large companies – like United Airlines, McDonalds and Walt Disney – have already implemented mandates. But other firms are worried that their already-thin labor force could be decimated by the vaccine-or-test requirement.
No matter what side of the issue one falls on, big questions still need to be answered about the mandates, including how much time and money it will cost for companies to implement a program and oversee compliance. And the mandate will face legal challenges; some GOP governors have already declared it an overreach and told President Biden they’d see him in court. Markets will be keeping a close eye on how companies respond to the proposed mandate over the next several weeks.

Taking a bite out of Apple

On Friday, a federal judge issued a ruling in Epic Games’ legal battle with Apple. Epic – the producer of Fortnite, which every parent of teens has heard of – sued Apple over its App Store policies. Both sides got small wins: the judge deemed the App Store’s structure legal but said forcing people to pay apps through the App Store and taking 30% of the payment as commission is not. For iPhone and iPad users, the ruling means that they could soon have the option to pay through each individual app’s system instead of the App Store. This could lower the price for apps, especially if developers no longer have to give a 30% cut to Apple. The ruling could also put a dent in Apple’s stronghold over how its apps are purchased and distributed. But don’t expect immediate changes, as both sides have said they’ll appeal the ruling.

Over the weekend, the U.S. marked 20 years since the 9/11 terrorist attacks. As we all paused to remember, the FBI began releasing newly declassified information, including a report outlining the extent of Saudi involvement. Remember the spirit of unity we all felt just after the attacks? It’s interesting to note the difference in response to that national crisis and the events of the past 18 months. Still, a common thread links the events of 9/11 and the pandemic: Ordinary people doing extraordinary things to help their fellow Americans. A big thank you to everyone who served on the front lines, both then and now. 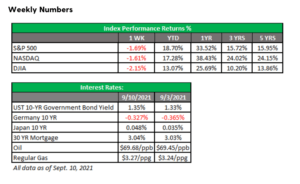