Fed finally makes a move. Is it enough?

At its last Federal Open Market Committee (FOMC) meeting of 2021, the Federal Reserve finally said what we’ve all been feeling and took some action. Initially, the Fed announced it would begin tapering its $120 billion per month in bond purchases by $15 billion. It was also prepared to raise rates after completing the taper by June 2022. But the most recent consumer price index (CPI) showed inflation running at a 6.8% year-over-year rate, more than three times the 2% target level the Fed set as an acceptable rate of inflation. In response, the Fed abruptly shifted its tone by doubling the pace of the taper to $30 billion per month and ending the taper by March. It also signaled it would likely raise rates three times in 2022.

The markets initially took off after Chairman Jerome Powell’s announcement before the realization set in that the cheap money party might actually come to an end. Up to now, the pressure to move rates off these artificially low levels hasn’t existed. The economy was doing OK and unemployment was coming down. Plus, the stock market has provided really good returns, humming along at sleepy levels of volatility with no competition due to the absence of any real choices for investors.

But then we had a rapid spike in inflation — and the mood began to sour. To date, cheap liquidity didn’t have the shadow of inflation hanging over it and there seemed to be a fragile balance, especially pre-pandemic. It only took a few short months of adding more money to a recovering economy to create the mess we’re confronted with now. Specifically, the stimulus bill from last March put $1.9 trillion in the pockets of individuals, who quickly began spending. There wasn’t a corresponding level of increased output because people received additional government transfer payments and many did not return to work. How did we think that all would end with more money in the hands of consumers and the same amount of consumption plus fewer people working and producing? Shutting down the oil pipelines and restricting oil exploration also likely contributed to this inflationary mess since energy is an input cost for every product we make.

So now the Fed acts — but will it be enough? They originally told us there was no inflation, followed by a little inflation is OK, then inflation is transitory. The Fed has been a day late and more than a few dollars short in responding to the current predicament. It won’t be surprising if three rate increases become four or five by the Fed’s next meeting. The lack of leadership and failure to recognize a very apparent problem provides cause for concern.

Omicron does its best Grinch impression

Like an uninvited guest at a holiday party, omicron doesn’t seem to want to go away this holiday season. Some people want to revisit some of the policies of the past, like lockdowns and more mandates. The constant back-and-forth on what it means to be fully vaccinated, confusion over the efficacy of new vaccine requirements and boosters and the doom-and-gloom from the president on the effects of omicron on the unvaccinated isn’t helping. Companies that were the most aggressive in requiring employees to return to work are now encouraging them to work from home, while some colleges are telling students to go home and learn online.

The shopping season has disappointed so far, and this negative energy could drive consumers farther into a spending cave while the dual monsters of inflation and omicron prowl just on the edge of darkness outside. That scenario plus higher rates may create the type of pressure that drives this so-so economy into a recession — a situation that would not be welcomed in 2022. 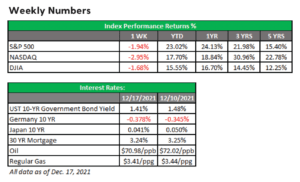