As we emerged from the Thanksgiving holiday weekend, the large stock market drop on Black Friday was fresh in investors’ minds. Black Friday weekend shopping readings offered little optimism as they were still well below pre-pandemic levels. Consumers seem to have front-loaded purchases in response to supply chain concerns. Markets rallied to start each of the first three days of the week, only to fizzle after each session. It wasn’t until Thursday that we opened solidly up and remained there, but we are still well below pre-Thanksgiving levels. Friday’s jobs report (more below) didn’t create any expectations that the Federal Reserve would alter its stance, so markets faded as we closed out the week.

We still need to learn a lot about the new coronavirus variant, but the restrictions many feared haven’t appeared so far. President Joe Biden banned travel from southern Africa, where the variant was originally identified, but there has been no talk of new lockdowns, school closures or additional mandates in the U.S. Instead, we have been encouraged to get vaccinated or boosted and wear masks. What “was” new was word going around that people will need to be tested before entering theU.S. and to quarantine for seven days upon arrival or obtain some sort of travel passport. Right now, however, that’s all talk — which we’ll probably have a lot of over the next several weeks.

How about the market’s reaction to the new variant? This shouldn’t be a surprise; given the market’s elevated levels, talk of interest rates rising (more below) and inflationary pressures, it’s no wonder markets are jittery. We haven’t had a meaningful repricing for well over a year, and it’s normal for the market to let off a bit of steam to reevaluate current levels before deciding on a new direction. This is where we are right now, and how long this evaluation period will last is anyone’s guess.

In the end, interest rates and profits drive stocks

Right now, it isn’t easy to see the next big thing that will propel us forward. The Fed has signaled it is considering speeding up the taper to fight inflation. Friday’s jobs number was lower than expected, but the unemployment rate ticked down, so the excuse for the Fed to drag its feet is absent. If the Fed begins to taper faster, the next step seems to be higher interest rates. The only effective way to combat inflation is to reduce the supply of money or simply make money harder to access — and higher interest rates will likely do that. Higher borrowing and debt servicing costs will eat into corporate profits and lower stock prices. Higher interest rates will also likely provide an alternative for investors who so far had practically no choice other than the stock market to turn to for potentially decent returns. Higher costs of doing business, alternatives to the stock market and less money for consumers to spend will be big headwinds for the markets to keep marching upward from here.

Where do we go next?

While Friday’s jobs numbers (+573,000 estimated vs. +210,000 actual) may seem disappointing, the unemployment rate actually ticked down to 4.2% from 4.6%. Additionally, wages are rising, although they don’t seem to be keeping up with inflation.

This jobs report was post-Delta and pre-Omicron, so maybe everyone who wants to work is working.Delta was blamed for low job creation numbers in August and September, and then we snapped back in October (or were at least in line with estimates). Job openings have remained stubbornly high, and there are more and more reports of people leaving the workforce and not coming back, which would explain why the unemployment rate dropped without a massive addition of new jobs. It’s difficult to assess whether we’ll see a slowdown in jobs because of the new variant, but we sense that a jobs slowdown won’t happen.

Hopefully, fourth-quarter GDP will be stronger than Q3 and job growth will be steady enough for the unemployment rate to continue to drop, although 4.2% is pretty good. If that’s the case, the Fed will be forced to address inflation via a faster taper and raise interest rates much sooner than the consensus is saying. The current consensus is 25 bps in Q4 2022; instead, we could see two to three hikes starting as early as May or June of next year, with the first one around 50 bps.

The other concern right now seems to be the very real potential of a government shutdown around the holidays or early next year. The continued back-and-forth between the Build Back Better legislation and the debt ceiling will continue well into the new year, so there is very little for the market to pin its hopes on as we end 2021. 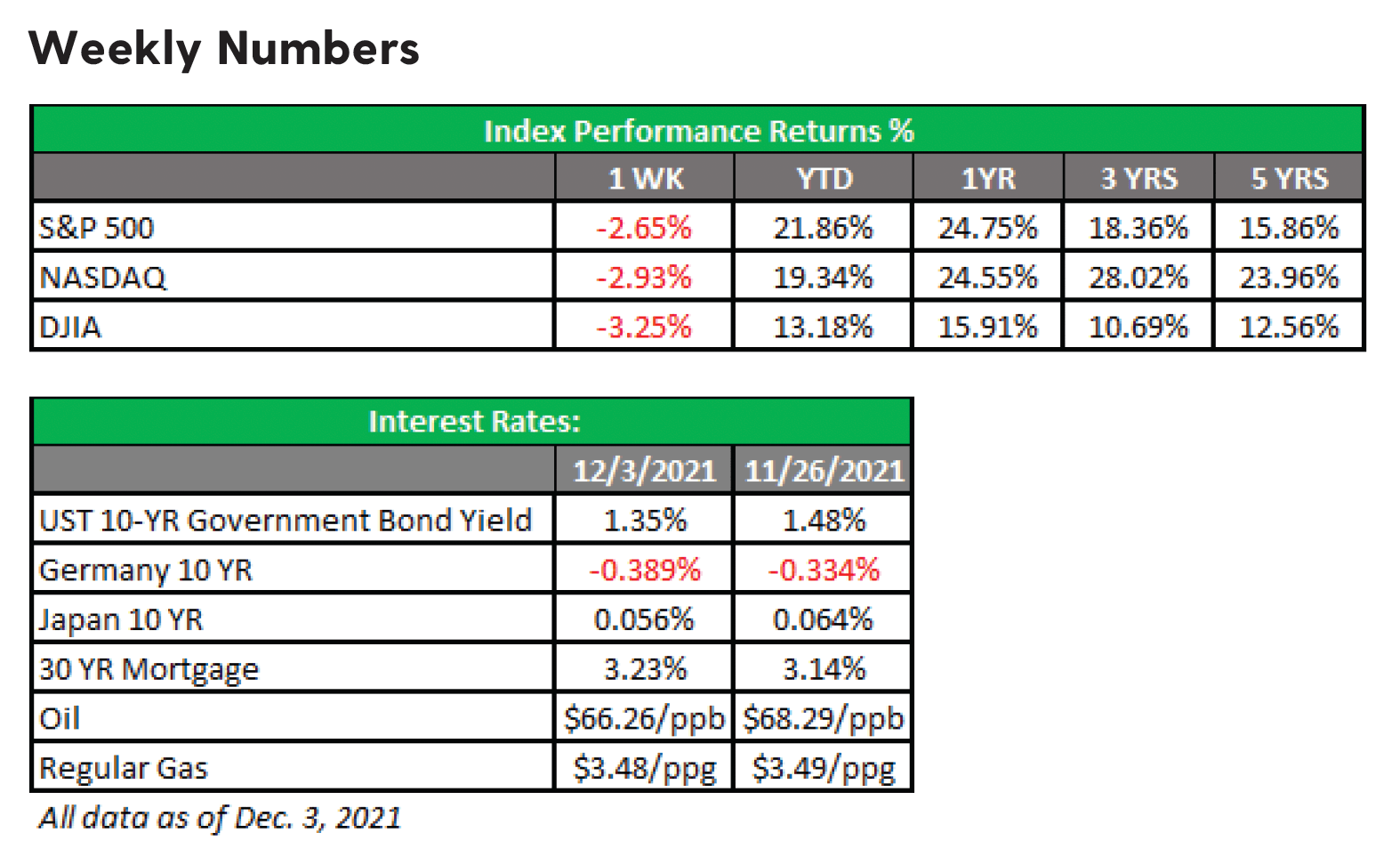