As far as movies go, the phrase “Out of Africa” is fantastic. But when related to a new and more dominant mutated strain of coronavirus? Not so much. News of the Omicron variant led to European Union countries and Israel curtailing travel from southern Africa. U.S. markets got spooked, with the Dow dropping over 900 points in the short Friday trading session. Fears of new lockdowns, economic slowdowns and yet another wave of infections all pressured the markets to sell off, while the volatility index (VIX) and bond yields dropped.

This raises questions: Is the new variant more severe than other strains? Will our current vaccines be effective against it? Will the government push lockdowns and restrictions like we’ve seen in other parts of the world — such as Austria and Australia — to stop the spread? Or was the sell-off an overreaction and this will all blow over? We’ve got more questions than answers right now, so we’ll watch closely to see how this situation develops.

Powell gets the nod

Concerns over who would lead the Federal Reserve were alleviated as President Joe Biden gave current Fed Chairman Jerome Powell the nod for another four-year term. There was speculation that Powell might be replaced by and the Fed would head in a different direction. Both Powell and Brainard are rate doves who would prefer to keep rates lower for longer, so there probably wouldn’t have been much of a shift. The markets were initially upset with the choice but then recovered to realize that there really was no change to the plan for tapering through next June with the possibility of raising rates in the second half of 2022.

The minutes from the last Fed meeting were also released last week and showed some Fed governors increased support for the taper to end sooner given the current rate of inflation. Markets have hung in at record levels as increasingly deteriorating economic data has been set off by strong earnings. Can the market ignore rising inflation and a slowing economy as earnings remain strong? And will those earnings keep rising, or will inflation lead consumers to throw in the towel? Only time will tell.

The other major question is whether the Fed will have to accelerate tapering and raise rates sooner than planned. Back in the day, we kept hearing the term “soft landing,” and the Fed told us we could deal with a little “transitory” inflation. Given the current trajectory, there may not be any “soft landings” in the near term.

A drop in the bucket?

President Biden announced last week he would authorize the release of 50 million barrels of oil from the strategic oil reserve in an effort to ease energy prices. The U.S. uses about , a figure which Secretary of Energy The problem here is that releasing 2 ½ days’ worth of supply will likely make zero impact on energy prices. Foreign oil producers will likely simply pump less until the price rises to levels no one is comfortable with. That’s the cost of losing energy independence. Heating oil and natural gas prices are set to rise this winter, which won’t sit well with consumers who will have less to spend on other goods and services.

Pricier turkey here is no match for Turkey’s woes

Despite this year’s Thanksgiving dinner costing 14% more than last year and inflation running in the United States, things could be worse. Sure, Black Friday wasn’t as robust due to supply chain issues, but we could have a situation like we’re seeing in the country of Turkey, where the currency plunged to a record low last week. The lira’s 18% slide last Tuesday undermined confidence, making it harder for businesses to pay off foreign-currency debt and increasing the cost of imported goods, especially oil. The situation could push the inflation rate even higher than the current 20%. Turkish President Recep Tayyip Erdogan sent the currency spiraling further downward when he said higher interest rates don’t rein in inflation and only dampen economic growth. So more easy money will solve the problem? That’s beginning to sound familiar. 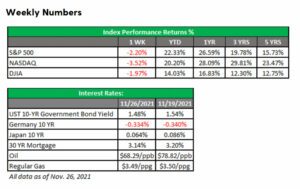