The third-quarter earnings season kicked off last week. After a few days of fretting about inflation, stagflation, labor shortages and supply chain worries, the markets decided enough was enough.Bolstered by better-than-expected earnings from the likes of Bank of America and Morgan Stanley, the market had its best day since July 20 on Thursday.

Markets also shook off a pretty dark week dominated by concerns over inflation, which is not the temporary phenomenon we were told it was (more below). In addition, everyone was all twisted up over delays and supply chain hang-ups. Those concerns have not gone away; the consumer price index (CPI) and producer price index (PPI) both came in roughly in line with expectations (5.4% year-over-over actual vs. 5.3% consensus and 8.6% year-over-year actual vs. 8.7% consensus, respectively). Still, what exactly was there to celebrate? We shouldn’t be worried about 0.1% in either direction, but we should be worried about a 5% and 8% year-over-year increase in prices. We should also be concerned about not enough dock workers to unload ships, not enough truckers to drive these goods to market, and not enough people to stock the shelves and service customers.

To be sure, the banks had good earnings, but are they sustainable when faced with an onslaught of inflation and unfriendly business policies? Can the port of Los Angeles keep up the pace if workers quit or are fired because they refuse to get vaccinated? Even if trucking companies can find drivers, can truckers drive through a state that just banned lawn mower engines to deliver their contents? These problems will likely continue to plague us until we solve them, which will require policy changes. The big question is whether current inflation is driven by an excess of liquidity or supply chain disruptions. We may be able to unload the containers eventually, but it seems likely prices will continue to rise.

We’ve said previously that the new administration’s policy changes would take months to impact the economy and our lives. Let’s focus on a couple of items that apply to all of us.

On his first day in office, President Joe Biden signed an executive order closing the Keystone XL pipeline, long opposed by environmentalists. The pipeline delivered 830,000 barrels of crude oil fromCanada per day. Then there were cancellations of fracking and drilling leases on federal lands, further lowering oil and natural gas production. It’s no wonder, then, that gasoline prices are now averaging over $3/gallon in 45 states, with none below $2.90/gallon, or that heating oil prices are expected to be43% higher this winter and natural gas prices have hit their highest levels since 2014.

Another policy change from the Biden administration was the continuation of coronavirus-related direct payments to people to remain at home this past spring. Almost all of the programs are expired, but some seem to be on the verge of being resurrected in the upcoming spending bills. Paying people to stay home and not allowing for foreclosures and evictions created shortages in housing and labor, driving up the costs of both. Businesses adjusted and produced what they could with what they had or went out of business. Fewer goods were produced because there were fewer workers to make them, but just as many people as before were consuming goods. Now we have containers stacking up at ports with no one to unload them, no one to deliver products and no one to stock the shelves. The vice president was in Singapore in August and warning people to buy their Christmas gifts early. Why didn’t they start working on the problem then?

These are two very abridged examples of some of the frustrations Americans are feeling from a direct economic point of view, and they came about from policy changes instituted by the current administration. Other policy missteps — such as the messy Afghanistan withdrawal, failure to address the rise in crime, conflicting messaging on masks and vaccines, and management of our southern border — all indirectly affect the economy because they erode consumer confidence, which accounts for 70% of spending.

For those who believed Federal Reserve Chairman Jerome Powell (and President Biden who repeated it) that inflation would be “transitory,” the Fed seems to have changed its tune. It’s a pretty stunning reversal from folks who were adamant this would be a very brief period of rising prices followed by a leveling off.
Last week, the Atlanta Fed’s Raphael Bostic said, “Transitory is a dirty word.” He also said, “It is becoming increasingly clear that the feature of this episode that has animated price pressures –mainly the intense and widespread supply-chain disruptions — will not be brief … By this definition, then, the forces are not transitory.” This is why we watch and listen to Fed officials give speeches; every once in a while we are treated to something insightful.

We know inflation is most likely here to stay. The Fed also believes and will use it as a reason to followthrough on plans to begin tapering its monthly asset purchases as soon as next month. It could also raise rates by this time next year if conditions don’t change by then (a tall order given how the market sand our economy behave). Should that happen, the plan could be to reduce bond purchases by $15billion/month: $10 billion in Treasuries and $5 billion in mortgages. The Fed buys $80 billion/month inTreasuries and $40 billion/month in mortgages, which means they would wind down their purchases in eight months (by June 2022).

Remember that although the Fed may begin to taper, it is still expanding liquidity, albeit at a slower rate. Until there is an actual rise in rates, the money supply will continue to expand. At least the Fed is signaling an end may be in sight after more than a decade of quantitative easing. 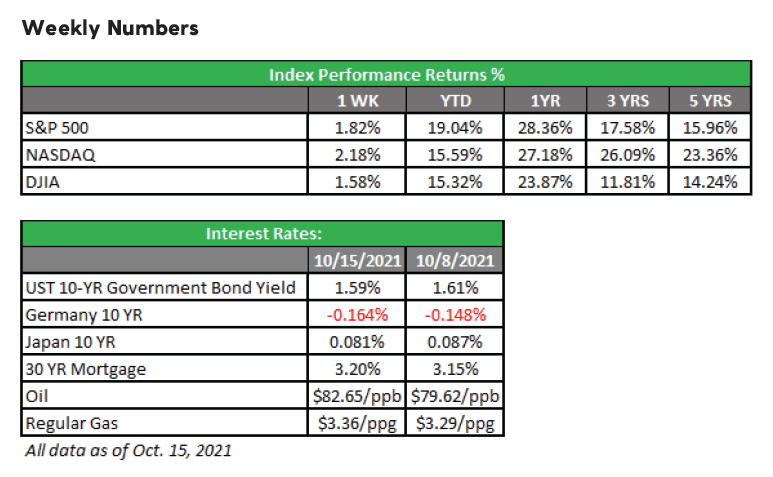