Markets return to record levels on the back of strong earnings

Markets surged on strong earnings for the second week in a row. With no new surprises from FederalReserve speakers and scant economic data, there wasn’t much to hold markets down and we hit record highs again last week. Washington was also quiet as talks continued around the infrastructure and Build Back Better spending bills. Sure, there was chatter around supply chain issues, higher gas prices and inflation. But nothing new came out of those conversations and markets remained unfazed, even when news broke about China’s successful launch of a hypersonic missile that could reach theWest Coast in 30 seconds.

The S&P 500 was up about 1.6% for the week, extending its bullish run for the third consecutive week. The index is up around 21% for the year — not too bad for all the ups and downs we’ve seen. The Dow is up more than 16% year-to-date; given that there are only 30 names in that index, a few laggards (Amgen, Boeing and Caterpillar come to mind) seem to have slowed the Dow down a bit. The tech-laden Nasdaq was flying higher as well and is up 17% year-to-date, but it appears the threat of rising rates has taken some of the wind out of tech’s sails.

The only real excitement last week was the announcement that former President Donald Trump is launching a social network, to be called Truth Social. The network is owned by a special purpose acquisition company (SPAC) called Digital World Acquisition Corp., which trades on the Nasdaq under ticker DWAC. Trades jumped after the mid-week news about the launch and were up 350% onThursday and 150% on Friday.

Overall, however, last week was a quiet one. Earnings took center stage and drove markets to new records, but it may be only a matter of time before they get restless again. We may still see more volatility and choppy markets as we head into the last two months of the year.

Skies not showing any signs of brightening

Yes, markets hit fresh highs last week and earnings are good, but all the same issues troubling markets in the past few months haven’t evaporated. So it isn’t really surprising that companies’ reports of increased revenues make us think of higher prices, not more sales.

Americans are increasingly saying inflation is the No. 1 problem facing the country. As it stands now, prices are expected to continue to rise, and although the Fed will begin tapering, they are still adding liquidity (i.e., more cash) into an already-flooded system. Gasoline prices are at 7-year highs, and President Joe Biden doesn’t think they will go down until 2022. Additional spending from Washington will not slow inflation but will likely only add to it. The shipping backlog and supply chain mess will also continue to add pricing pressures; it will also jeopardize the holiday shopping season, a critical period for retailers. Consumer confidence has been sagging, and higher prices and shortages won’t help bolster it.

The housing market remains red-hot, however, making it even more difficult for new homeowners to enter the market. Existing homeowners are reluctant to sell, worried they will not find something affordable. All this, plus the looming debt ceiling fight happening in early December, tells us that the overall climate has not improved. It may be prudent to take a watch-and-see approach to retirement strategies in the current financial climate. 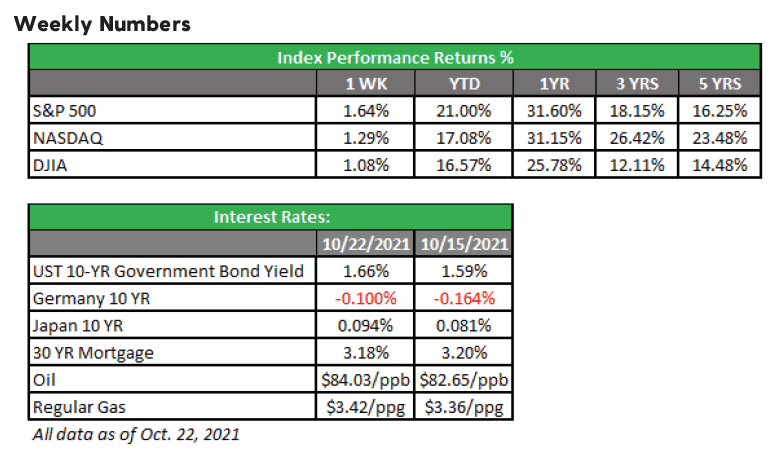