Screeching to a halt!

After growing by 6.3% in the first quarter and 6.7% in the second, gross domestic product (GDP) growth slowed significantly during the third quarter. Expectations were initially at +3.5% but dropped as the day for reporting grew closer. We landed at 2.0% growth for Q3 — an overall increase, but a much smaller one than what we saw earlier in the year. That’s not good news, especially when added to the dismal August and September jobs data.

There is talk that the slowdown is a temporary blip due to the Delta variant spike this summer. That sounds eerily like the “inflation will be transitory” narrative, which, so far, is proving to be false. Now we have had a significant drop-off in GDP, added to a couple of really bad months of job growth, and there are now likely real reasons for concern.

This situation feels very similar to the 2008-2009 financial crisis, which impacted the economy but not the markets. At that time, Congress spent a lot of time and effort on passing the Affordable Care Act(aka Obamacare), when many argued we should have been laser-focused on fixing the financial system and getting the economy going. Instead, politicians and policymakers argued over whether it was the right time for sweeping health care change and how that change would look. That uncertainty and increased regulations slowed the economy, but the markets soared because the Federal Reserve kept pumping liquidity into the system and kept interest rates low.

Fast forward to today: We should be focused on getting people back to work, fixing the supply chain and reining in inflation so the economy can return to normal. Instead, the government focused on a$1.75 trillion social spending bill that is full of things we do not need to be focused on today, in the wake of economic uncertainty, and many argue we don’t need at all. We already passed a $1.9 trillion stimulus in the spring; we also have an agreement on a $1.2 trillion infrastructure bill that would benefit the economy but is being held hostage because both bills have been bound together. There are plenty of “extras” in the infrastructure bill already, and the additional $1.75 trillion is just too much. All this additional spending and new policies and regulations threaten to create the same kind of uncertain business climate we saw post-2008.

The wrinkle here is that the markets may care a little more this time around, thanks to inflation. The Fed may not have the luxury to indulge in ultra-low interest rates because inflation is likely going to be a bigger and bigger issue. We should find out this week how the Fed plans to end tapering and the fate of the aforementioned spending bills. Another thing to watch is if Fed Chair Jerome Powell will remain in charge at this crucial point for our economy. His term is up in a few months, and President Joe Biden has not come forward with an endorsement, which will add to the uncertainty and increase concern in the market.

Markets bound upward while Facebook gives itself a facelift

Mark Zuckerberg announced last week that Facebook (NASDAQ: FB) will change its name to Meta (NASDAQ: MVRS) and undergo a branding change. It’s been reported that Zuckerberg is obsessed with the metaverse, a make-believe universe for gamers.

While the release of the new name sparked an initial surge by as much as 25% Thursday (for a similarly named company!), time will tell if there is any real impact. Facebook has had a tough time lately. Congress has taken it to task over revelations that the company knowingly put profits ahead of concerns regarding the harm its platforms may have caused customers and children. It may not have prompted the rebranding, but Facebook needed a lift — we’re just not sure this is it. Unless the company fundamentally shifts its direction, woes will follow Facebook no matter what it calls itself.

Markets also didn’t seem to blink at the weaker Q3 GDP reading or the spending agenda delay inCongress. The logic may have been that slowing economic growth and potentially less spending fromWashington could translate into lower inflation, which in turn could lead the Fed to hold off tapering or raising rates. That seems to be somewhat of a stretch, but there is no explaining the recent upward movements of the market other than earnings being pretty strong.

Strong earnings have mostly pushed the market to new records, and there seems to be scant concern that anything’s out of place — despite warning signs everywhere. Sometimes you have to wonder if the market is seeing the same things you are. When you look at a slowing economy, low job growth, record numbers of unfilled jobs, inflation running at 30-year highs, lower consumer confidence and soaring government spending, you wonder: “Just what is the market looking at?”

If you’re comfortable with where things are right now, you should sit pat, but remember that we haven’t had a correction in the 10%-20% range since the pandemic lows of March 2020. Corrections happen, and the longer we go without one, the more likely we will have one.

That said, it’s always a good time to conduct an investment gut check. How would you feel if the market dropped -15%? We’re not saying it will, but it can — and has — and you should consider that possibility. If you’re uncomfortable with how things stand, make adjustments. If recent history is any indication, a market move will be swift and won’t give folks much time to react. 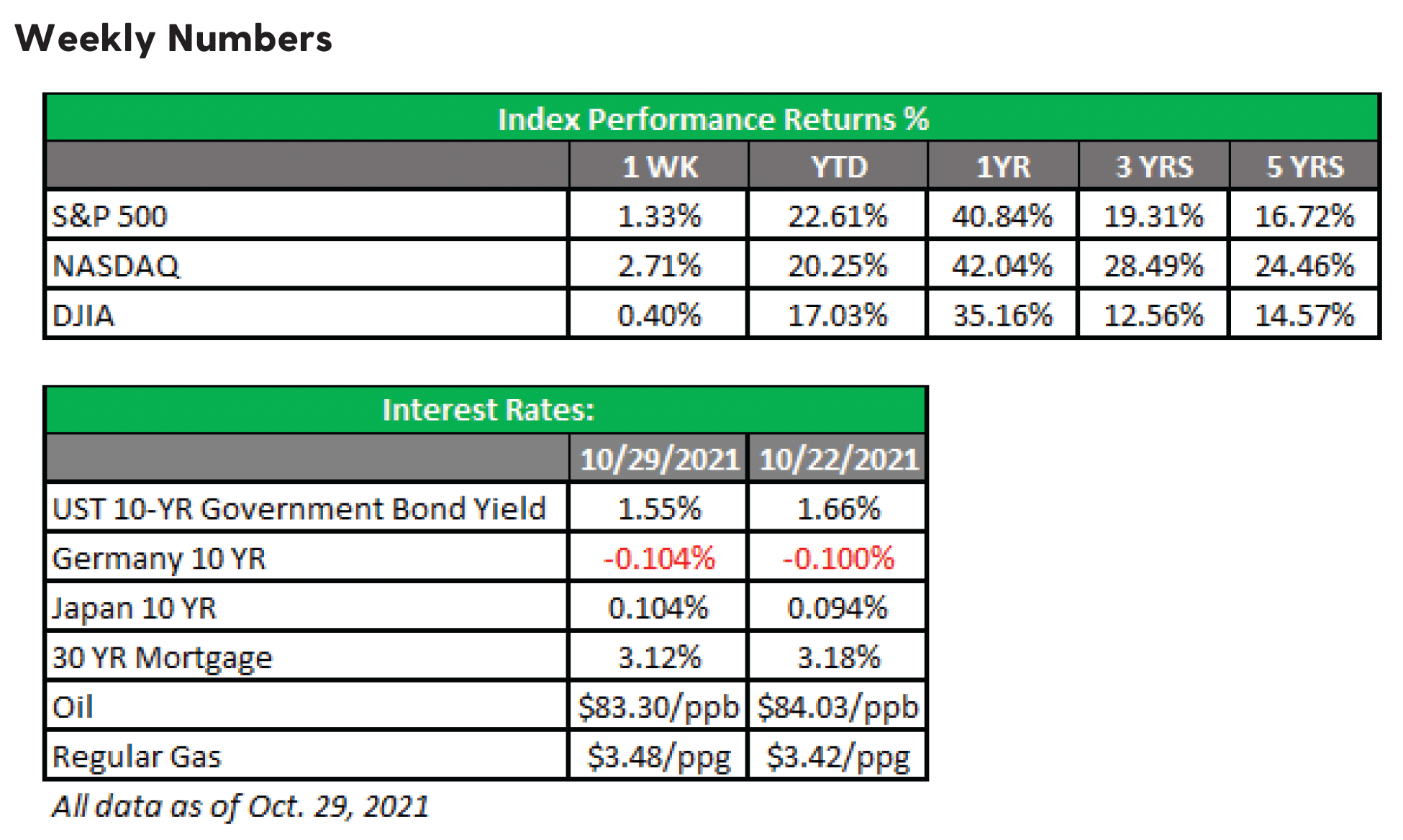