U.S. stock indexes soared higher after Senate Majority Leader Chuck Schumer said lawmakers had reached a deal on a short-term debt limit extension, which would put off a possible government default to December. The markets rallied on the news, erasing most of the previous week’s losses amid more volatility than we’ve seen recently.

What’s hard to understand is that the delay does not rectify the situation. Senate Republicans want Senate Democrats to use the reconciliation process to increase the debt ceiling, which would force a commitment to a top-line number for the ceiling. Democrats, however, want to suspend the debt limit via the normal process, which would not hamstring any additional spending, but that may not happen due to the filibuster. (Democrats passed a $1.9 trillion stimulus bill last spring without Republican support via reconciliation, and Republicans say they should do that again for the debt ceiling.) Republicans said as much in a letter to Sen. Schumer over the summer, and they’re saying it again now. They don’t want to be on the hook for an unlimited amount of spending, while Democrats are reluctant to commit to a number because of the optics.

Given all that, the debt ceiling debate and potential for default has not gone away. The argument that there isn’t enough time to pursue reconciliation is no longer a viable reason not to fix this; if you knowRepublicans are expected to filibuster the regular process, the only option is to start working on a reconciliation solution now. Markets breathed a sigh of relief last week, but we still have inflation, a slowing economy, two months of disappointing jobs data (more below) and rising interest rates. All of these factors will likely continue to be front and center, and the ceiling drama will only add to the uncertainty in the coming weeks.

So you’re telling me there’s a chance?

The 3.5 trillion Build Back Better bill was pushed aside last week in light of the debt ceiling drama mentioned above. Right now, the votes aren’t there for passage of the bill in its current state, and Congress is considering a revised $2 trillion price tag.

The longer the bill sits out there, the longer people have time to consider some of the components and form opinions about how exactly it will help all Americans. The debate isn’t about a top dollar amount for the spend, it’s about the proposed policies and whether they’re a good use of taxpayer funds. Republicans have opined that the $1.2 trillion infrastructure bill is already laden with more than 90% non-traditional infrastructure spending. (Which is accurate if you take a specific and narrow definition of infrastructure.)

If passed in its current form, the Build Back Better bill plus the infrastructure bill adds up to nearly $5 trillion in spending. Is quadrupling the budget of the IRS, requiring banks to report on all transactions over $600 to the Treasury, taxing unrealized gains in 401(k)s or providing “tree equity” a good use of funds? It may be better to spend money on shoring up Social Security and Medicare. The bill may include things that are useful and for the greater good, but all the other stuff could have bad policy implications for investors, savers and markets. All this spending and taxing likely will eventually create problems for the economy, but right now the markets seem to be looking past the longer-term impacts.

After the ADP report on Wednesday came in slightly better than expected (up 568,000 jobs vs. the consensus of 428,000), hopes were high for Friday’s Bureau of Labor Statistics (BLS) jobs report. Following a dour August reading of +235,000 actual vs. +740,000 estimate, it was hoped that the September jobs reading would be robust with kids back in school, extended unemployment and rent moratorium programs ending, and an eye-popping 11 million openings. Sadly, with expectations in the +500,000 range, the anemic 194,000 actual number fell flat, again. August was revised upward to +366,000, but that was still less than half of what was expected.

The primary reason given was that the Delta variant was peaking when the report was compiled. The participation rate — which counts the people actively looking for work — declined, as did the level of discouraged workers. In a rising labor market, the participation rate should be going up and the discouraged number should be declining as those folks get more active in their search for employment. So it’s a mixed bag, but perhaps the people who wanted to work got back to work and those who didn’t fell off the radar since they aren’t collecting unemployment or any additional measurable benefits.

One concerning trend of note is that wages continue to rise to the tune of 4.6% year-over-year, which directly points to the current levels of inflation. Fewer available workers demand higher wages and also boost prices (either through production capacity constraints leading to an inability to produce more to satisfy demand or rising prices to cover the higher wages required to hire employees).

In short, the disappointing report comes at a critical time for the economy. Recent data has shown solid consumer spending, growth in the manufacturing and services sector, and surging housing costs. How long will that last?

The Federal Reserve is watching the jobs situation closely. It has recently indicated the Fed is ready to start pulling back on some of the liquidity provided during the pandemic, primarily because inflation has met and exceeded the Fed’s 2% goal. But will the Fed still taper with two months of weak jobs growth? Markets need to digest all these details, which may only lead to more uncertainty and volatility. With jobs apparently stalling, it will only be a matter of time before the consumer is exhausted through inflationary pressure or a lack of confidence in the growth of the economy — or both. That leaves the Fed in a bad place: raise rates to stop inflation and potentially kill economic growth, or leave rates alone and watch inflation keep hurting the consumer and the economy. 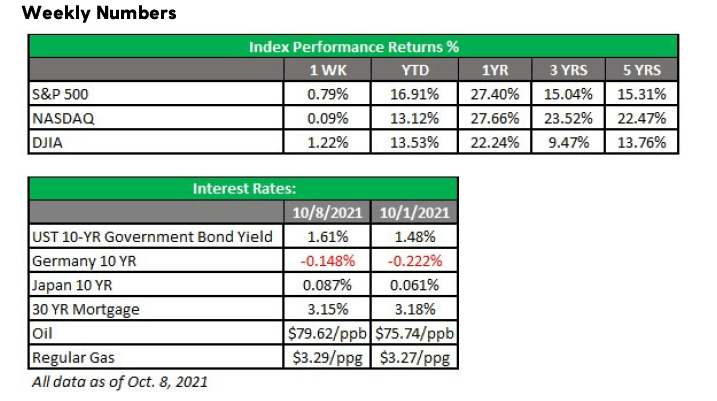 This information is not intended to be used as the sole basis for financial decisions, nor should it be construed asadvice designed to meet the particular needs of an individual’s situation. None of the information contained herein shall constitute an offer to sell or solicit any offer to buy a security or insurance product.