The market has been hovering near recent record highs this month and not retreating in any significant manner. Despite that, the market is showing signs that it’s worried about what may happen in the near future. We continue to experience slowing growth, higher inflation, a loss in consumer confidence and the very real potential of higher taxes, both personal and corporate. I don’t mean to sound like Chicken Little — but it seems more things could go wrong than right in the next three to six months.
One warning sign is that we’re currently off the average rate of occurrence for market corrections. We haven’t had a 5% correction yet this year. (We’ve normally had a couple by now.) We also haven’t seen a 10% correction in over a year. (The typical average is one per year.) Sure, we’ve been treated to a phenomenal run since the pandemic sell-off in February and March 2020. Tilting hard into the market was a no-brainer as we rocketed back to new records by the end of summer 2020 — and the party continued almost uninterrupted through the election until now.
My concern is that if you did lean heavily into the market and are overexposed to equities, it’s time to rebalance to target. What we’ve experienced in the markets during the pandemic has been unprecedented. If we do have a correction, we most likely won’t see the kind of rebound we saw after the pandemic or even after Q4 2018. It took four years to recover from the depths of March 2009 and rise past the records set in 2007, and that recovery actually happened sooner than people expected. Rebalancing to target will likely provide the opportunity for added gains and help improve the chances of reaching your goals. If you require funds in the next one to three years, it’s crucial to sit down and review your goals and needs to make sure you’re still on track. In my opinion, this is not the time to get greedy by staying overexposed and risking losing a 20% year-to-date gain for an additional 2% in return.
Remember the old saying: “The time to fix the roof is when it’s not raining.” Markets have been kind so far this year, and rewards have been generous, but now is the time to plan and adjust as needed.

Challenges for the Big Spend

A couple of weeks after the messy Afghanistan exit and its aftermath, and one week after President Joe Biden proposed sweeping vaccination mandates via an OSHA “workaround,” the massive $3.5 trillion spending package has begun to lose steam. Sen. Joe Manchin had already signaled a desire for a pause — and in a 50-50 Senate, that’s as good as a hard stop. More Democrats have begun voicing reservations as the bill’s details have emerged. Among key points of the plan: higher taxes on the rich (and everyone else), higher corporate taxes (which the people absorb via higher prices) and higher capital gains taxes on investors and even 401(k) accounts. It’s important to note that none of this is set in stone; these things may or may not happen, and if they do, their final form is still uncertain. What is certain is that there are many distractions right now, and these distractions are giving key folks like Sen. Manchin and Sen. Kyrsten Sinema the opportunity to delay the movement of this massive spending package. My view is that the longer the bill is delayed, the more uncertain the outcome. And uncertainty around the bill may be contributing to the uncertainty we’re seeing in the markets.

Delta, the Fed and a governor recall vote

While the Delta variant seems to be slowing, if not cresting, the economy appears lethargic and uninspired. The road to fully reopening has been painful; there seem to be new complications each week, from consumer sentiment or vaccine and mask mandates to inflation, supply chain worries or some random crisis. Even the Federal Reserve hasn’t been spared, as an insider trading probe has forced the mostly private Fed into the spotlight. California residents chose to stick with Gov. Gavin Newsom last week. In some bizarre way, their vote not to recall validated some of his more onerous policies instituted during the pandemic. If people hated the way things have been handled, why did they choose to continue on the same path? I don’t recall seeing or hearing Gov. Newsom offer any contrition or say he would handle things differently going forward. What does California’s recall election mean for our markets or economy? California is the fifth-largest economy in the world and a significant portion of our national economy. If it continues down its current path, it may not bode well for our nation’s full recovery. Gov. Newsom’s pandemic policies caused enough of a stir to trigger a recall, but his easy win means the jury is out on whether his policies will become a blueprint for the rest of the country. On the flip side, maybe this was just a wacky recall election in a deeply Democratic state that had zero chance of success. I’m hoping it was the latter since California’s policies were highly detrimental to small businesses and have held California back from more fully reopening. 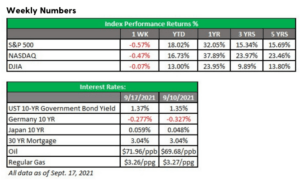 AE Wealth Management, LLC (“AEWM”) is an SEC Registered Investment Adviser (RIA) located in Topeka, Kansas. Registration does not denote any level of skill or qualification. The advisory firm providing you this report is an independent financial services firm and is not an affiliate company of AE Wealth Management, LLC. AEWM works with a variety of independent advisors. Some of the advisors are Investment Adviser Representatives (IAR) who provide investment advisory services through AEWM. Some of the advisors are Registered Investment Advisers providing investment advisory services that incorporate some of the products available through AEWM. Information regarding the RIA offering the investment advisory services can be found on https://brokercheck.finra.org/. Investing involves risk, including the potential loss of principal. No investment strategy can guarantee a profit or protect against loss in periods of declining values. The personal opinions expressed by Tom Siomades are his alone and may not be those of AE Wealth Management or the firm providing this report to you. The information and opinions contained herein, provided by third parties, have been obtained from sources believed to be reliable, but accuracy and completeness cannot be guaranteed by AE Wealth Management. This information is not intended to be used as the sole basis for financial decisions, nor should it be construed as advice designed to meet the particular needs of an individual’s situation. None of the information contained herein shall constitute an offer to sell or solicit any offer to buy a security or insurance product. 1827503-3