The major domestic equity indexes all dropped last week for the fourth consecutive week of losses. In all, markets dropped 8.8% in April. The S&P 500 moved further into correction territory, down roughly 14% from its recent peak, while both the Nasdaq and small-cap Russell 2000 are down about 24% from recent highs.

Blame for the losses could be placed on the usual suspects, including ever-increasing inflation and still-rising prices. Earnings results dragged markets down late in the week, with disappointing results from Amazon and Apple weighing especially heavy on investors’ minds. Amazon shares plunged 14% after the company announced its first quarterly loss since 2015, citing weakening online sales. Apple’s shares bounced upward midweek after the tech giant announced record-setting revenues in the first quarter. However, those gains were gone by Friday, as Apple offered cautious guidance for the current quarter due to ongoing supply chain problems.

But the biggest news for the week was the first reading of U.S. gross domestic product (GDP) for the first quarter. Although consensus expectations called for growth of 1.0%, GDP actually came in at -1.4% in the first three months of the year. While the contraction is something to watch, most economists agreed that solid consumer spending and business investment are still robust and that it’s too early to conclude we’re headed toward a recession.

Other data last week supports the idea that the U.S. economy is still buzzing along. If you look at what Americans spent instead of what they produced, you get a much rosier picture. Personal spending rose 1.1% in March. Plus the year-over-year increase in the personal consumption expenditures (PCE) price index eased to 5.2%, its first deceleration since early 2021. (The Federal Reserve uses the PCE as a gauge of inflation.) Household spending grew by 2.7%, even as prices continued their upward march with no relief in sight.

What will the Fed do this week?

The Fed is scheduled to meet on Tuesday and Wednesday this week. Some analysts believe we could see them raise rates by 50 basis points (.50%) at this week’s meeting and get more aggressive in their fight against inflation. But their current situation appears to be a sticky one: Higher rates mean higher borrowing costs. Higher borrowing costs mean less purchasing power. And less purchasing power could potentially slow the economy — and lead us directly into a recession.

But at this point, they may not have a choice. April’s Consumer Price Index (CPI) report won’t be released until a week after the Fed’s meeting, but March’s number of 8.6% revealed that inflation high and something needs to be done.

Excuse me, officer: I’d like to report a hamburglary. McDonald’s said last week that it raised menu prices by an average of 8% in the first quarter from the same period a year earlier, as franchisees try to cover rising costs. Leaders at the home of the Golden Arches blamed the price increase on supply chain issues caused by the Russia-Ukraine war, although rising labor costs are also driving expenses up. Other fast-food slingers are also increasing prices, reducing portion sizes, swapping in lower-price ingredients or some combination of all three.

For those who like to get their food to go and eat it in the comfort of their own homes, you may pay more to do it in new digs. U.S. home prices accelerated in February as demand remained high and supply stayed low. However, that was before mortgage rates started their upward climb. Average 30-year mortgage rates hit 5.42% last week. That’s a big jump from April 2021, when average rates were near 3%. 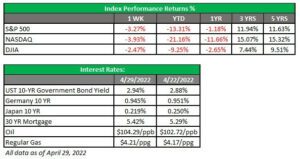 The information and opinions contained herein, provided by third parties, have been obtained from sources believed to be reliable, but accuracy and completeness cannot be guaranteed by AE Wealth Management.