More horrific images came out of Ukraine this week, as Ukrainian President Volodymyr Zelenskyy made an impassioned appeal to the U.S. Congress for more aid in his country’s fight against Russia. As we enter the fourth week of the conflict, it appears the Russians have stalled and are resorting to increasingly brutal measures to subdue the Ukrainians. Digging tanks into defensive positions and bombing civilians doesn’t seem like some sort of grand strategy, but then again, who knows what’s in Putin’s mind?

While “talks” between the Russians and Ukrainians stalled last week, the price of oil dropped below $100 per barrel briefly and the Federal Reserve delivered its much-telegraphed 25 basis point (.25%) rate hike. Plus, President Joe Biden spoke with Chinese leader Xi Jinping. That was all the markets needed to stage a relief rally of about 1,500 points on the Dow to end its miserable five-week losing streak.

Was the approximately 5% rally the beginning of something? It appears unlikely. We still have unresolved issues, including the Ukraine-Russia war, ongoing inflation (more below) and the global oil supply issue (and tangentially energy and gas prices). Basically, we’re no better off than we were two weeks ago, apart from the Fed finally doing what we all knew it would do. Therefore, it doesn’t seem like this is the start of a prolonged rally that could erase this year’s losses so far.

We still need to be careful, however. Anything can happen in Ukraine, and we still do not have a clear indication of where China ends up in all this. We also don’t know what we’re prepared to do if China doubles down in its support for Russia and defies the West and its sanctions — or what Russia might do if it feels China has abandoned them. The ripple effect on our economy would be immense, so geopolitics remain front and center. Closer to home, we’re still grappling with our own internal struggles of inflation, high gas prices and supply chain issues. It’s hard to understand why the markets are as buoyant as they are given the current backdrop.

The Fed makes its move!

The 25 basis points (.25%) rate increase last week was a given. The surprise? There will be six more hikes this year. The move was largely telegraphed, so it was priced into the markets. Markets dipped immediately after the announcement, but once they figured out that the Fed was once more making equities what may be the only real option for investors, they took off again.

When the U.S. 10-year Treasury was trading below 2% and inflation was running at 2% to 3% per year, we were looking at a flat or slightly negative real return. People piled into stocks and went yield hunting in some sketchy places. Now the 10-year is over 2% but inflation is at 7.9% and rising. Where will people turn when the net negative real return is closer to 6% versus being flat before? And if the 10-year approaches 3% or 4%, they’ll still be upside-down by 4% even if inflation stops rising.

If stocks were the only game in town before, stocks will most likely be the place to be until the Fed gets serious. At least they stopped putting liquidity into the system and ended quantitative easing. A fed funds rate of 2% by the end of the year is not going to slow 8% inflation. The Fed has once more rolled over in accommodation to the stock market and has reinforced the concept of TINA (There Is No Alternative). They have also added to the likelihood of the economy slowing significantly or even moving into recession by year’s end or in early 2023. 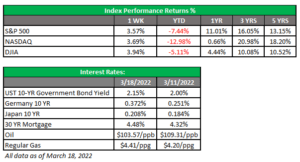