Markets have a wild week but still grind lower

Monday was ugly as oil touched $130 per barrel. Then Wednesday saw a significant decline in oil, and markets shot up more than 650 points while the Job Openings & Labor Turnover Survey (JOLTS) data showed we are still near record levels of openings. Thursday brought us a 7.9% year-over-year inflation number, up from the prior month’s 7.5.% figure. Meanwhile, the Biden administration finally announced we would stop buying Russian oil but has offered little by way of a solution for replacing and enhancing our own energy needs. In Ukraine, we put the kibosh on Poland giving its Soviet-era MiG-29 fighter jets to Ukraine to help defend the air space as the Russians slowly crawl along toward Kyiv.

When the invasion started, it seemed the Russians’ slow roll was some kind of grand tactic; as it turns out, the Russians have exposed themselves as a mismanaged, under-equipped farce of a military with a severe lack of will to fight. When former Soviet Premier Joseph Stalin was confronted with the marked lack of quality in the Soviets’ equipment, he pointed out the vast amounts of military hardware the USSR possessed and said simply, “Quantity has a quality all its own.” That’s not the case for current Russian President Vladimir Putin, but he does have approximately 4,500 nuclear warheads, which makes a direct confrontation with his ground forces to resolve this issue without spreading the destruction difficult.

The fact that the Ukrainians have held out for over two weeks speaks volumes for their desire to stay free and determine their own destiny. This mess will continue to roil energy markets and contribute mightily to the levels of volatility we are experiencing, but the Ukraine drama has only been an accelerating factor to push us into the problems the market is experiencing right now. For months we’ve expected a slowdown in the economy, inflation was on the march long before the Russians were, oil and gas prices have moved steadily upward through the past year, and consumers have been battered for over a year. It would be disingenuous to blame the current market woes entirely on the Russian invasion of Ukraine; this most recent development only pushed us even faster to our current predicament.

President Joe Biden says he cannot do anything about the high prices people are paying for gas, but what are some things the government can do to lower energy costs and put a dent in inflation? Here’s one option: If you allow the fossil fuel industry back online, markets will react almost instantaneously. Just the mere news that we will produce more oil will stop the price increases and speculation, which may even begin to lower the rate of inflation. It’s probably too much to expect things to settle down even after a resolution to the conflict in Ukraine is reached (hopefully soon, for humanity’s sake). We are still dealing with 40-year highs in inflation, and the Federal Reserve will need to act. The fear is that their response will be feeble, just like the West’s response with the situation in Ukraine. Unfortunately, we aren’t faced with a simple, easily implemented solution — and every action can and will be met with a potentially bad reaction. 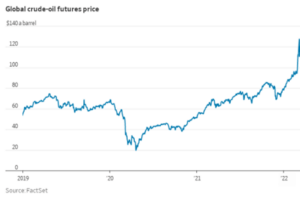 The Fed and its dilemma

We’ve been saying it’s possible the Fed will wait too long and then move too aggressively and accelerate our decline into a recession. Now it’s becoming apparent that the Fed will do little to nothing at all. The upcoming 25 bps (.25%) hike Fed Chair Jerome Powell has announced will likely have no impact on the 7.9% inflation rate we are currently experiencing. Anything more meaningful and aggressive will most surely push us into a recession, but it appears we are going that way anyway. It would be preferable to see the Fed use this opportunity to hike rates, stop inflation dead in its tracks and have enough dry powder to help kick-start the economy and make the recession as short and shallow as it can be. Instead, the Fed has been mealy-mouthed and is allowing the market to drive rates and set priorities. Every time the markets get skittish, the Fed offers dovish talk that soothes them.

This is where it appears we’re headed: The Fed will not overreact but instead stand idly by as inflation rages and eventually burns out on its own. People simply will not have enough money to keep spending at current levels, profits and company earnings will decline, the stock market will continue to slide, consumers will lose confidence and — voilà! — we’re in a recession. The first part of the cycle will be stagflation (inflation with low to flat economic growth). The next phase will be plain ol’ recession, since people who do not have jobs tend to spend less. That will be the natural and painfully long solution to inflation: Prices will stop rising and/or decline because demand will crater.

So what should the Fed do? Maybe they should deploy some shock and awe, raising rates by 50 bps (.50%) at this week’s meeting. Then let that percolate, and if we don’t see inflation begin to flatten, go 75 bps (.75%) in May and a full 1% in June. That would be a jump of 225 bps in three meetings and should put a major dent in inflation while providing the Fed room to lower rates as the economy begins to recover. Yes, some are saying the Fed should not tighten into a slowing economy and an energy shock, but these two things are already upon us. We might as well take the bitter medicine as quickly as we can and at least provide the Fed with some tools to help as we emerge from this downturn. 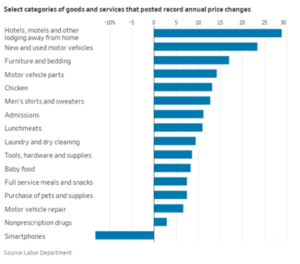 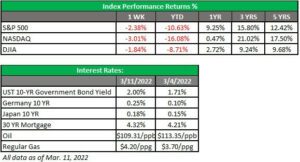